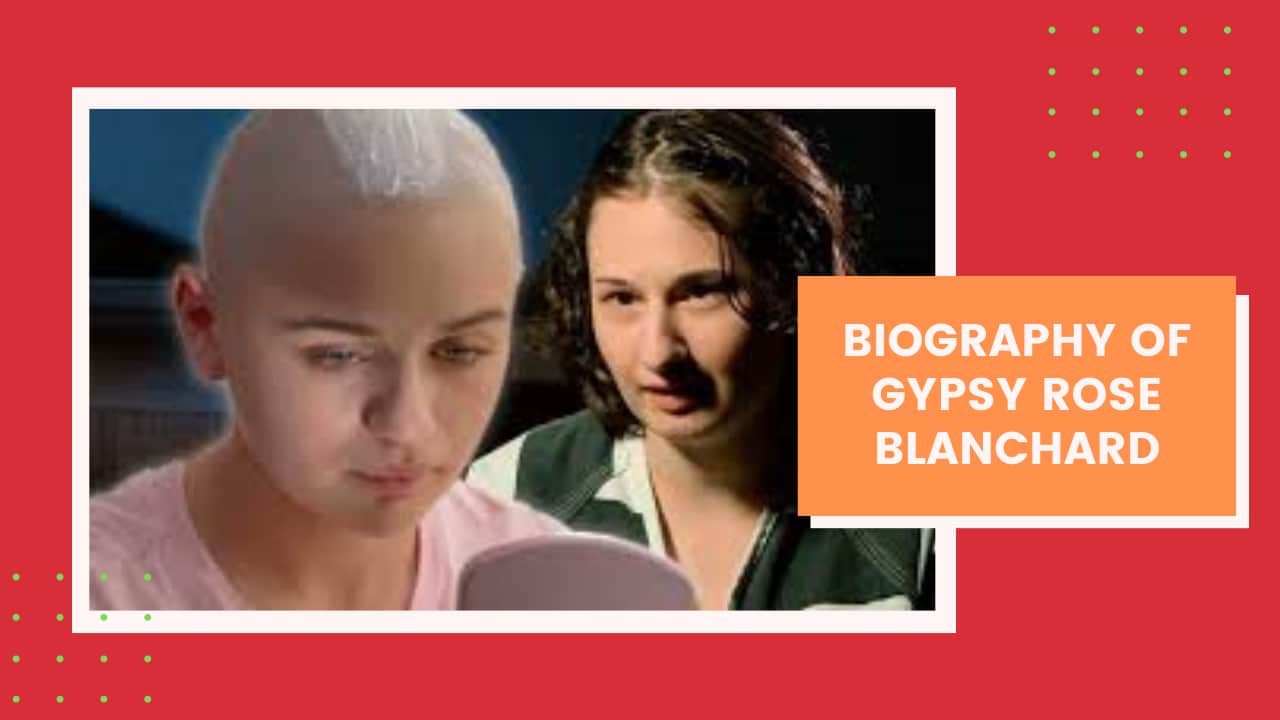 Here you will get all answers about Gypsy Rose Blanchard. We also tell you the interesting facts about her boyfriend and teeth. If you want to know then stay with us.

Gypsy Rose Blanchard was born in 1991. She grew up with her mother, Dee Dee Blanchard. Gypsy’s mother suffered from Munchausen by proxy syndrome, a mental disorder in which caretakers exaggerate or in some cases even cause illness in another in order to get attention from themselves.

Due to this disorder, she made claims about Gypsy Rose that resulted in a series of dire diagnoses. Even when Gypsy was a baby she began pretending that Gypsy had different illnesses.

Gypsy Rose Blanchard also went through multiple surgeries, including removal of the salivary gland and procedures of her eyes. It’s often considered a form of child abuse and Gypsy was confined to a wheelchair and hospital rooms for much of her life, even though she wasn’t actually sick.

The abuse was bad enough that Gypsy Rose tried to escape. After one such attempt, her mother literally held her captive by chaining her to the bed and putting bells on the door.

In addition to the psychological abuse, Blanchard claims that her mother Dee Dee was also physically abusive. This included withholding food for days and hitting Gypsy Rose with a coat hanger. Dee Dee also claimed that she was sick and began to lie about Gypsy’s age.

Dee Dee told Gypsy’s father that their daughter had a chromosomal disorder therefore she had many health issues. Even when some of Dee Dee’s family noticed that Gypsy Rose Blanchard did not seem to need a wheelchair and asked questions, Dee Dee and Gypsy moved away.

In 2008, Gypsy Rose Blanchard and her mother moved into a new home in Springfield, Missouri. It was painted pink and had a wheelchair ramp. There was at least one physician who didn’t believe Dee Dee’s claims about her daughter’s illness.

A neurologist named Dr.Bernardo Flasterstein. He told ABC News that when he examined Gypsy for muscular dystrophy and cerebral palsy, he had a feeling something was amiss.

After Flasterstein told Dee Dee that he believed Gypsy’s prior diagnoses were incorrect. Instead of being relieved, she grew furious and stormed out, screaming to his nurses that Flasterstein was a quack.

Flasterstein then wrote Gypsy’s primary care physician a letter saying that he suspected Dee Dee had Munchausen by proxy, although he didn’t think the situation was dire enough to contact child productive services.

Flasterstein wasn’t the only doctor with suspicion. A police report obtained by ABC News claims that one of Gypsy’s doctors notified authorities that they weren’t able to detect any symptoms that supported Dee Dee’s allegations about her daughter’s illnesses.

Child services visited the Blanchard’s home twice but claimed to not see anything untoward. In February 2011, Gypsy tried to run away with a man she’d met at a science fiction convention.

He was a 35 years old man, who invited her to his hotel room. Dee Dee found out and brought papers claiming the Gypsy Rose was a minor. When the mother and daughter returned home, Dee Dee reportedly took a hammer to their computer.

Godejohn, for his part, has demonstrated a possibly unhealthy obsession with Gypsy, whom he met on a Christian dating website in 2012.

Dee Dee knew about Godejohn as Gypsy introduced him in hopes of attaining her mother’s approval. But that plan backfired, as Dee Dee became jealous and ordered her daughter to stay away from him.

Gypsy and her then-boyfriend Nicholas Godejohn conspired to end the life of Dee Dee, who was found stabbed to death in her Springfield, Missouri home in June 2015. Godejohn and Gypsy were arrested and charged.

This case has gone on to receive plenty of media coverage, particularly in the HBO documentary, Mommy Dead and Dearest and the Hulu TV series the act. She was sentenced to prison for 10 years, but she claims that she now feels freer than she ever did under her mother’s roof.

Nicholas Godejohn has reportedly tried to keep in touch with Gypsy Rose since their arrests, but she doesn’t want to communicate with him. Gypsy’s health has reportedly improved since her incarceration, no doubt thanks to her no longer taking many medications her mother was giving her.

Gypsy has admitted that she knew she was not as unhealthy as her mother claimed, although she did believe her mother when she told her she had leukemia. Tough the ailments weren’t real, the surgeries and their effects were.

Gypsy’s attorney, Michael Stanfield, told Buzzfeed News that while most inmates lose weight in prison because the food isn’t exactly fine cuisine, the opposite happened for Gypsy. She gained 14 pounds in jail while waiting to enter a plea in her case.

Gypsy Rose was estranged from her father Rod Blanchard. She even told ABC News that she never knew that her father even paid child support for her until after her mother’s slaying.

According to Rod, this estrangement was by Dee Dee’s design. He told Fox News, Dee Dee spent a lot of time making sure that there was a distance between us. A lot of time I would call Gypsy and she would not be available to talk to me, but the next day she was.

Rod says that though Gypsy is in prison, their relationship has actually improved since Dee Dee’s death. They email frequently and Gypsy calls him often. Gypsy Rose Blanchard believes that she should be in prison, but not necessarily for a decade.

She understands why she locked up, but she explained to Dr.Phil, she’s not convinced that ten years behind bars is the best remedy for her.

She also explained that she couldn’t just jump out of the wheelchair because she was afraid and she didn’t know what her mother would do, therefore he decided to kill her mother, Dee Dee instead of exposing Dee Dee’s lies by standing up in public.

1: How did Gypsy Rose lose her teeth?

When Gypsy Rose was eight years old, her mother described that she is suffering from Leukemia and muscular dystrophy and said she required a wheelchair and feeding tube. Therefore she removed the Gypsy’s salivary glands. The removal of Gypsy’s salivary glands, which her mother instigated by applying a numbing agent to her gums was particularly painful Gypsy has speculated that the numbing agent may have also contributed to her tooth loss.

2: Did Gypsy Rose get her teeth back?

Her teeth did rot and were subsequently removed due to, the removal of salivary glands.

3: Who was Dee Dee Blanchard?

Dee Dee Blanchard was the mother of Gypsy Rose Blanchard. She suffered from Munchausen by proxy syndrome also called (factitious disorder imposed on another), a mental disorder in which caretakers exaggerate, fabricate or in some cases even cause illness in another in order to get attention from themselves. Therefore, Dee Dee Blanchard claimed that her daughter, Gypsy Rose Blanchard suffered from a variety of illnesses, in reality, Gypsy has only one occasional physical condition a lazy eye.

Gypsy Rose Blanchard was sentenced to ten years as a result of her guilt plea to second-degree murder. Despite her desire for a shorter sentence. In 2020, she is currently serving a 10-year prison sentence from the Missouri Chillicothe Correctional center. She admitted that she actually feels, quite freer in prison than she did when she lived with her mother, which she’s described as a different type of prison, one in which she couldn’t have friends or go outside.

Gypsy met Nicholas Godejohn at a Christian dating website. She convinced him to kill her mother, Dee Dee, by telling him the truth about her mother’s actions. In June 2015, Nicholas came to Gypsy’s house and killed Dee Dee.

6: When and where Dr.Phil take the interview of Gypsy Rose?

The director of the HBO documentary “Mommy Dead and Dearest” told the Rolling stone about Gypsy’s condition. Gypsy Rose Blanchard knew that she could walk but it would be better for her that she stayed in the wheelchair.

8: Who is Nicholas Godejohn?

Nicholas Godejohn was the boyfriend of Gypsy Rose Blanchard. Gypsy and Nicholas Godejohn conspired to end the life of Dee Dee, who was found stabbed to death in her Springfield, Missouri home in June 2015. Godejohn and Gypsy were arrested and charged. Gypsy Rose now believes that Godejohn was similar to her mother in terms of their controlling nature.

9: How did Gypsy and her boyfriend meet?

Gypsy met with her then-boyfriend, Nicholas Godejohn at an online Christian dating website and they planned to kill the Gypsy’s mother, Dee Dee Blanchard.

10: Why Gypsy Rose Blanchard’s age was a Mystery?

Gypsy Rose Blanchard did not know her own age. She just knew that she was deathly ill. Gypsy’s father Rod Blanchard told Fox News that, I would call her on her birthday. But Dee Dee would tell me, don’t tell her it’s her 18th birthday. I don’t want to tell her how old she is. But now Gypsy knows her original age.

I introduce myself as Muhammad Tehseen, content writing expert, Video editor, and the founder of rtsbooks4u.com. I have been writing articles and blog content for online publications and companies for the past 4 years. My main goal is to influence people with my words. And help others to improve their lives.