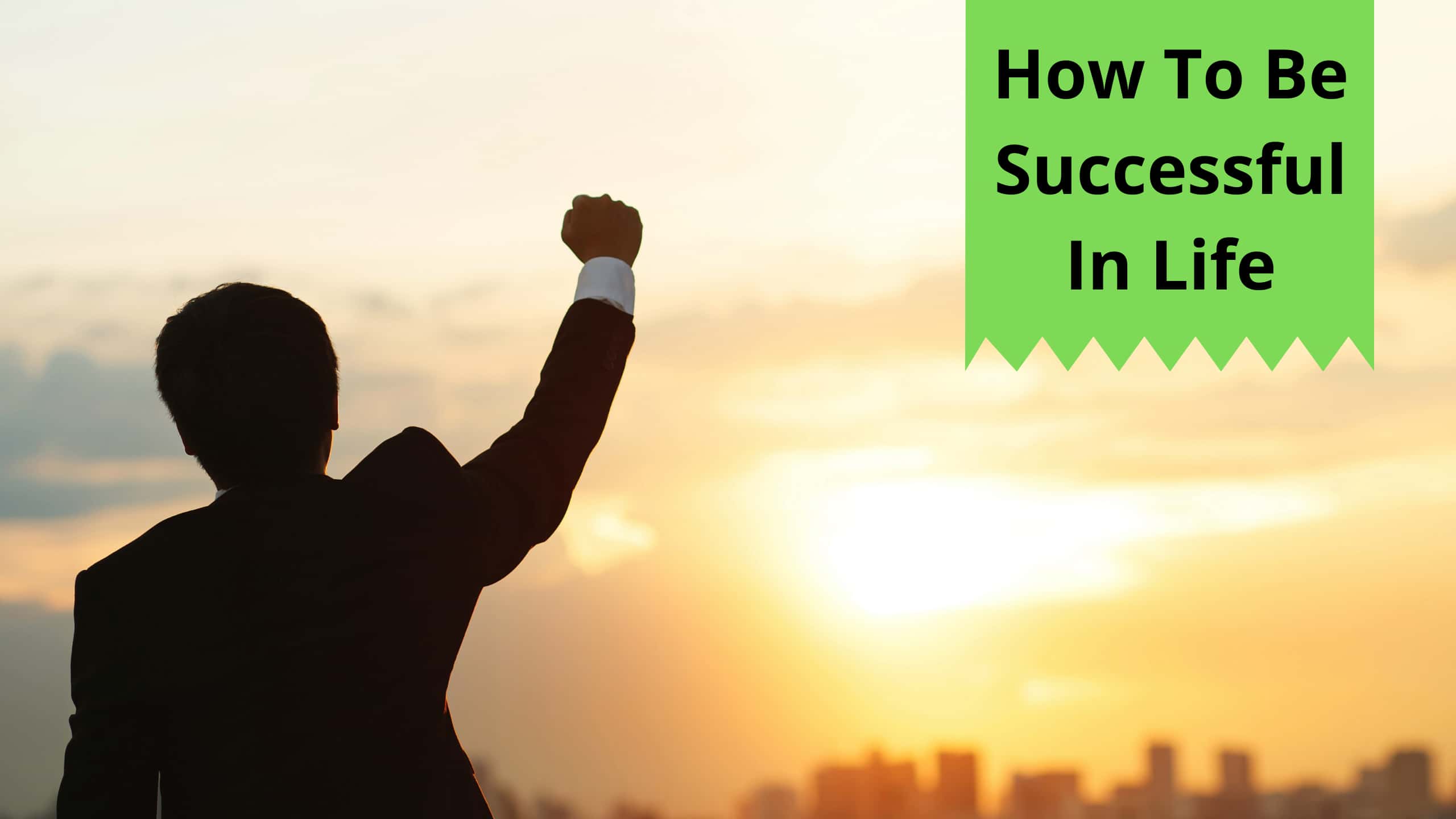 Today I will tell you how to be successful in life. All information is taken from Napoleon Hill’s book “Think and Grow Rich“. Robert Kiyosaki in his New York Time’s Bestselling book “Rich dad Poor dad” recommends us to read this book.

And this book is as useful today as it was 85 years ago. This book consists of 250 pages. Before writing this book, the author has researched for 20 years. And he interviewed about 500 successful people at that time.

Through 20 years of research, Napoleon Hill has shared with us in his book the 13 points that were shared by these rich people. I will explain these points in this article. And you too can be a successful person by following these points.

On the contrary, when you see a sports car and say that I like this car and I will buy this car in a month or two, then this is your desire. I hope you have understood the difference between desire and wish.

1: Fix the Amount of Money you want

Not that I need a lot of money. You need to be clear. If a boat is floating in the ocean and it doesn’t know its destination, it can never reach its destination. And there is a high chance that it will sink on the way.

2: Determine exactly what you intend to give in Return for the Money you desire

3: Establish a definite date when you intend to possess the money you desire

Now make a plan of how you will achieve this goal. And then follow it. Don’t think that I will make a perfect plan and follow it. Instead, start implementing whatever plan you have.

Write down everything you have decided in the above four steps on a piece of paper.

Read what you have written at least twice a day, once in the morning and once in the evening. This will make it clear to you and your mind exactly what you want.

The author says that specialized knowledge is many times better than general knowledge. Because all the successful people had complete knowledge of their field. You have often seen that a doctor who treats all diseases earns less money.

In contrast, a doctor who specializes in one thing earns more money. Once a newspaper wrote that Henry ford is an ignorant Pessimist. So Henry Ford filed a case against this newspaper.

During the case, the lawyer of the opposing party started asking useless questions to Henry Ford. Like who is Benedict Arnold? How many soldiers did England send to the United States in 1776?

At first, Henry Ford kept answering these questions. And when he lost his temper he said to the lawyer: You are asking useless questions. I will answer them.

But it is important for you to know that there is a line of buttons under my desk. And I can press these buttons and call anyone who can easily answer all my questions. So tell me what is the use of remembering this General Knowledge which I can get by just pressing a button.

3: Imagine what you want

Napoleon Hill says Imagine what you want to achieve. Think about it. Because everything that has been made so far has been imagined before.

In the beginning, when you think and imagine different things, people will call you crazy. Because what is beyond human comprehension, the man refuses to accept.

If someone said 400 or 500 years ago today that I would create something that would allow people to talk to anyone anytime, anywhere, there would be as much distance as they wanted.

So people would call it crazy, of course, but today it is common. We can talk to anyone anytime from a mobile phone.

Remember, you cannot succeed in anything unless you have perseverance. If you want success in any work, you must persist no matter how many times you have failed. And keep trying to reach your destination. 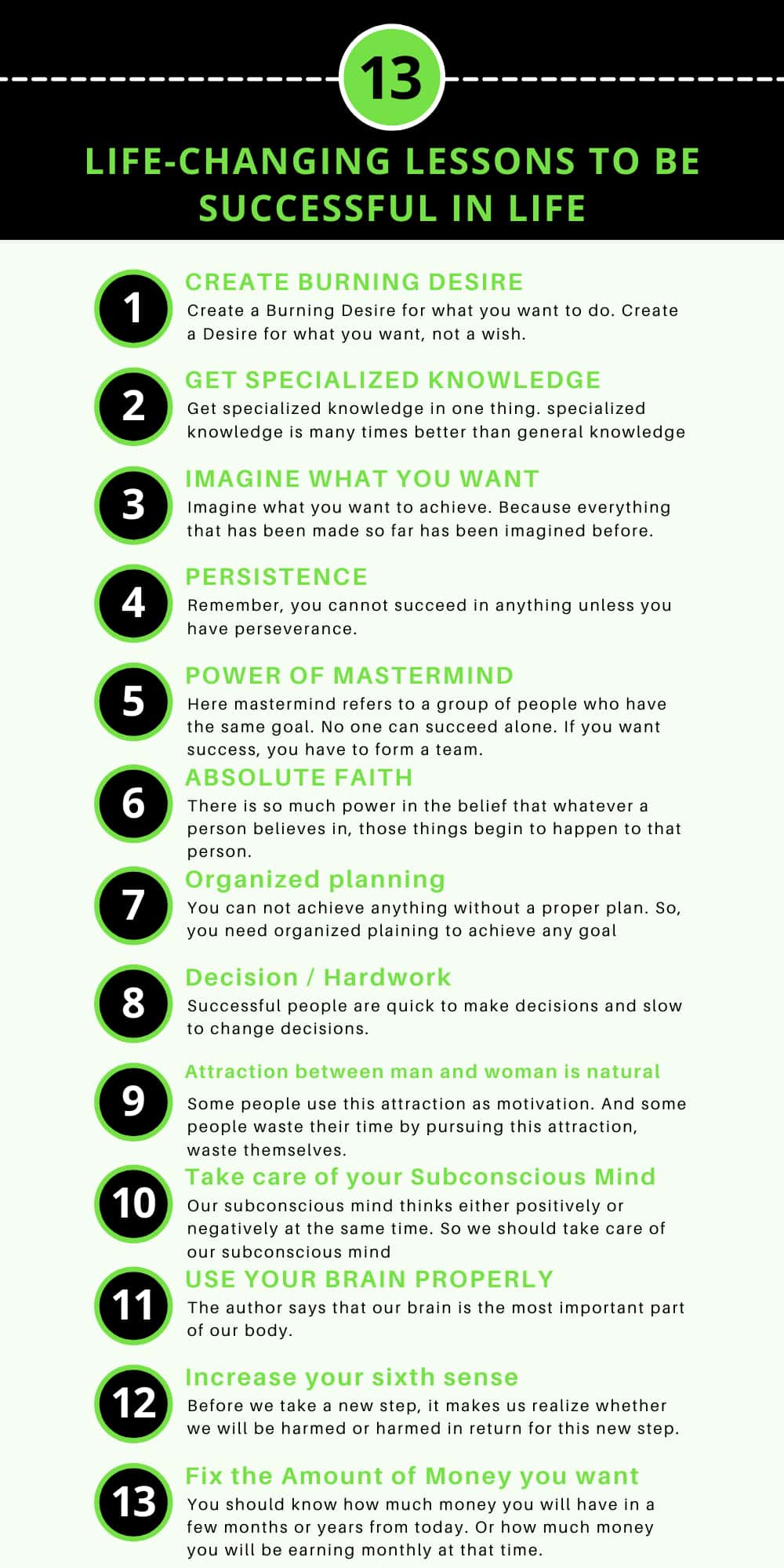 A child was partially deaf in his childhood. So one day his school teacher told his mother that her child is completely incompetent. We can’t teach him. Don’t send him to school anymore.

But this guy grew up and invented the bulb. Yes, I’m talking about Thomas Edison. Edison tried to make the bulb failed about 1000 times. But he persevered and finally succeeded in making the bulb.

Here mastermind refers to a group of people who have the same goal. No one can succeed alone. If you want success, you have to form a team.

For example, in the group, you sit in, everyone except you smokes. So there is a very good chance that you will also start smoking.

So spend most of your time with positive and successful people. And add such people to your team. And stay away from negative people.

If you are not sure what plan you have or what you want, then you will definitely fail to achieve your goals.

If you want to build your own hotel and open its branches all over the country. But you are not sure that your first hotel will be successful. Then the idea of opening a second or third branch of this hotel is impossible.

The author says that there is so much power in the belief that whatever a person believes in, those things begin to happen to that person.

And if you really want to run 10 km at the end of the month, you will need an organized plan. That means improving your diet and increase your stamina by running on a daily basis.

Until you are able to run 10 km in one go. That is why Napoleon Hill says that you need organized planning to achieve any goal.

On the contrary, successful people work hard and diligently and face every difficulty that comes their way.

10: Attraction between men and women is natural

You may have heard most people say that behind a successful man is a woman’s hand. The author says that there is a natural attraction between a man and a woman.

You should also check out my this article in which things that attracts a woman to a man.

11: Take care of your Subconscious Mind

12: Use your brain properly

The author says that our brain is the most important part of our body. Our subconscious mind acts as a sending station for our brain and our creative imagination acts as the receiving set of our brain.

Check out my other article in which I share habits that make our brain weak.

The author says that there is no tip to increase our sixth sense. Unless you follow the methods mentioned earlier. Our sixth sense grows with our experience.

And before we take a new step, it makes us realize whether we will be harmed or harmed in return for this new step. In addition, our lack of knowledge, fear or uncertainty affects our sixth sense.