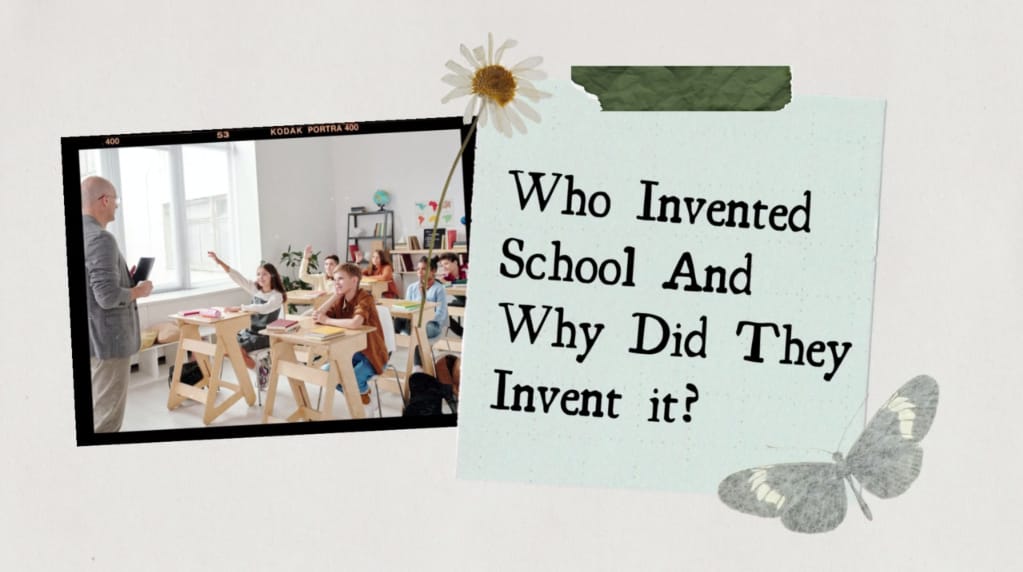 Whether you are a student or not, many questions about school definitely have come to your mind. Like: Who invented school and why? And What was education like before schools? etc. I will give answers to these questions in this post. And I have also shared some shocking facts about the creation of school.

Horace Mann was the person who invented school in 1837 when he became Secretary of the newly-created Massachusetts Board of Education. He introduced the system in which professionally trained teachers give education to a group of children in one place called school.

This was the short answer to ‘Who invented school?’. But in this article, I have explained the complete history of the school system and detailed answers to all the questions that come to your mind about schools. So, Keep reading…

Who was Horace Mann?

Horace Mann, also known as the father of the common school movement, was born on May 4, 1796, in Franklin, Massachusetts.

Mann was born in a poor family and  grew up in poverty. He got his early education in a one-room schoolhouse by comparatively poor teachers. As he was curious about the study. So, he managed to educate himself in the Franklin town library.

It may be his own experience with getting an education during his upbringing that burned a fire to improving public education inside him.

At the age of 20, Mann attended Brown University as a Sophomore. Where he studied law and expanded his interest in social reform. Before his election to the Massachusetts House of Representatives he practice law till 1827. He served there till 1833.

Then he joined the Massachusetts Senate In 1835 and served there till 1837. After that in 1837, he became Secretary of the newly-created Massachusetts Board of Education.

This is the short biography of Horace Mann. Now, I will tell you what was the role of Horace Mann in the creation of the current school system?

What was the role of Horace Mann in building the current school system?

Mann strongly believed that public schooling was central to good citizenship, democratic participation, and societal well-being. Mann also believed that in democratic society education should be funded by local taxes, and based on well-trained professional teachers.

In 1837 when he became Secretary of the Massachusetts Board of Education he used his position to enact major educational reform.

He led the Common School Movement to ensure that every student could receive a quality education funded by local taxes.

In 1838, he made the first schools in Massachusetts. At that time Mann knew that the quality of rural schools had to be raised, and professionally trained teachers were the key to that improvement.

In 1838  Mann started a journal named Common School Journal for teachers. So, teachers follow and get on the same page in their teachings. It had a great impact on the early stage of the development of teacher training schools and professionalized teaching.

First, he created a one-room school in which trained teachers teach students of all ages together in one place. After some time he introduced the age-grading system in schools.

He quickly set about establishing a statewide system of common schools staffed by professionally trained teachers. His ideas quickly gained momentum and in 1852 Massachusetts passed a compulsory attendance law.

Why was school created?

The process of transfer of education from one generation to another generation is as old as the human itself. But in the old periods, there were no specific schools to get an education like today.

Our ancestors taught their young generations what they learned in their life in their own ways (By practically and orally).

With the passage of time, as man developed the human population also increased. Soon people figured out that it would be easier and more efficient to have a small group of adults teach a larger group of children.

This was the early stage of school. But at that time the students were taught about survival and religious ideas rather than calculus. So, what is the reason behind the creation of all the boring stuff that students are taught in the current school system?

In my opinion, The whole purpose of the current school system is to create a factory military workforce and employees. Such a force that works from 9 to 5 like machines without any questions. This is unbelievable but true.

Are Schools worth it or not?

Everyone may have their own opinion or beliefs according to school. For some people school is the place to get knowledge but for some people, schools are only a waste of time and money.

To avoid this controversy I will throw some pros and cons about the school. After reading these pros and cons you can easily decide if school is worth it for you or not.

Here are some pros of the current school system.

You should definitely check out another article in which I shared the benefits of school and education in detail.

Here are some cons of the current school system.

How did people acquire education before schools existed?

As I said above, the transfer of education is as old as the human itself. Some children had been educated about hunting, living, and other aspects of life by their parents practically, some had private teachers, and some were educated from books.

As the father of early modern medicine  “Ibn Sina or Abu Ali Sina” got an education from books.

Although before school existed every religion had its own way to teach religion to its youth. Some of them I have explained below.

In the Quran Allah told Muslims to “Seek knowledge, even if you have to go to China”. At that time China was being far distant from the Arab and an almost mythical country for them.

The Holy Prophet Hazrat Muhammad (PBUH) often gathered their followers in the mosque and give them knowledge of Islam and the Quran. After some time the number of Muslims started to increase as the large number of non-muslims accepted Islam as a new religion.

Due to this reason, they had to build Madrasas where they teach the Quran to the children and new Muslims. Some people also believe that Muslims are the first who created school.

Before the creation of the school in India, a child had to leave home and live with a teacher in a gurukul located in the jungle for the entire duration of his studies.

The duration of this period varies from 12 years to 48 depending on how many subjects the student wanted to learn. Girls also get an education about housekeeping, singing, and dancing.

Most of the Hindu gurukul are renowned universities today. Some of the famous universities that are known for their specialization are the University of Nalanda, Takshashila University, and Vallabhi University.

The Buddhist Education system was originally taught by Buddha on the basis of basic life. This education is based on the moral, mental and physical development of a student.

Interesting facts about the creation of school

Fact #1: The Shishi High School is located in Chengdu, China has earned the title of being the world’s oldest school. It was made in 194 AD and became a modern school in 1902.

Fact #2: The City Montessori School (CMS) in India enters the Guinness Book of World Records in 2019 for the largest school in the world in terms of the number of students.

Fact #3: In Finland, the kids do not start school until the age of 7.

Fact #4: In Germany, A school has been constructed according to the design of a giant white cat from the outside. But it is just like any other school from the inside.

Fact #5: France has the shortest school year from August to June and also the longest school day.

Why do many students hate school?

Most of the children don’t like school and some of them hate going to school. But have you ever thought about why many students hate school? Even school gives them knowledge and education.

One of the main reasons is the lack of freedom in school.  As there are too many restrictions in school for children. Due to this, they feel like a prisoner in the school.

Another reason is too much competition. Every parent wants their children to get A+ in exams. As a result, at the age at which most children explore nature, they have a lot of burden of homework, exams, and other things.

It builds so much pressure on children’s minds and sometimes it causes depression.

What does School stand for?

There are various acronyms of the word school. Some of them I have shared below. As we spend six to seven hours every day in schools. So, In my opinion, these are the best acronyms of school.

Here is the answer to some interesting questions about school and homework. If I have missed any questions you can ask me in the comments.

Most of the obscure educational blogs and forum websites claim that Roberto Nevilis was the person who created the homework. They say that an Italian teacher Roberto Nevilis invented homework in 1905 as a punishment for his students.

We don’t have any information for the topic from any trustworthy source or authority source.

So, In my opinion, it is a myth that Roberto Nevilis was the founder of homework. Wikipedia also considers it an internet myth due to the lack of historic evidence.

2: Does homework cause depression?

Yes! Homework causes depression in children. A research was conducted at Stanford Graduate School of Education among 4,000 plus students.

This research shows that about 56% of students considered homework to be a primary source of stress. It also increased levels of anxiety, sleep deprivation, exhaustion and weight loss.

3: Is homework a waste of time?

In my opinion, homework is completely a waste of time and useless. It increases the stress among students. And takes the enjoyment out of school, due to which most children don’t like school.

Everyone has their own thoughts. So, Do not panic if you do not agree with my thoughts. And also share your thoughts with us through comments.

If you ask me, should I go to school or not. Then my reply will be “Of course”. You should definitely go to school not to study but to live a school life. I guarantee you that school life will be the most memorable time of your life.

You like it or hate it. But school is the best place for our childhood. We make new friends in school, some of them live with us for a long time and some leave after school. But their memories are left in our minds.

In the end, the only thing that I want to say is that “If I had a time machine, I would like to go back to my childhood when I was in school. Not to change anything. Rather, to live my school life again”.

Also check out my other article in which I Have shared Ninja tips to make new friends in your college. And feel free to share your thoughts with us in the comments.

I introduce myself as Muhammad Tehseen, content writing expert, Video editor, and the founder of rtsbooks4u.com. I have been writing articles and blog content for online publications and companies for the past 4 years. My main goal is to influence people with my words. And help others to improve their lives.

6 thoughts on “Who Invented School and Why? Shocking Facts about School”